So it seems once again my life is running away with me!  I managed to disappear to the country for another couple of weeks, before I knew it I realised I hadn’t checked in again for ages! When I’m surrounded by fields and flowers and family, time just has no concept to me. So here I am, back in London and back to life as we know it…
I spent my time in the country scouring the vintage shops, socialising with our friends and eating glorious meals at our favourite restaurant The Stagg. One particularly memorable outing was to Ludlow, where we ate the most divine bubblegum ice cream, clearly along with time I had no concept of diet either!
Since I’ve been back there’s been a lot of the usual office catch up, as well as some exciting meetings, including talking over the upcoming Starlight Express worldwide tour. I had brunch with the gorgeous and talented Robin Cousins at Soho House where every mouthful was gulped down to make way for our non stop chatter, and also a top secret meeting at the R.U.G offices to confer with the Lord who is Andrew Lloyd-Webber himself.
Wednesday was an exciting start to the day, filming an interview for the new London Lifestyle TV channel up at the top of the Gherkin. The views were spectacular, and I could have happily stayed up there for hours. That evening however was a party to end all parties. The ITV Summer Party was in a beautiful and exquisitely decorated garden. There was food and nonstop champagne with guests so familiar as TV faces I thought I knew them all when actually I didn’t! The highlights for me were seeing Olivia Coleman from Broadchurch and Kevin Whately from the family favourite Lewis. I also chatted to old friends Ant and Dec, Holly Willoughby, Emma Bunton, Louie Spence, Ben Shepherd, Dermot O’Leary, Ross King (who had hot-footed from USA for the party), the surprisingly calm Keith Lemon, the sweetly adorable Matt Lucas and the beautifully kind Helen Fospero. Of course there were many more including the usual gangs from Essex and Chelsea, and it was wonderful to see everybody mingling and mixing. Sadly my phone decided to die on me as I was leaving the house so I couldn’t take any pictures, and I woke up the following morning with my head banging wondering if it was all a dream… 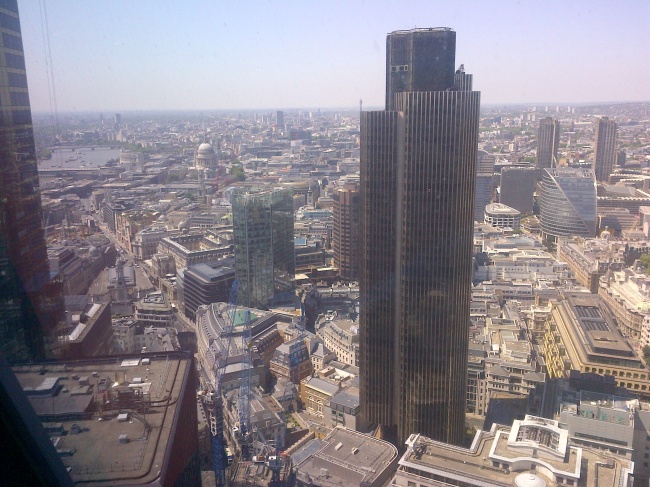 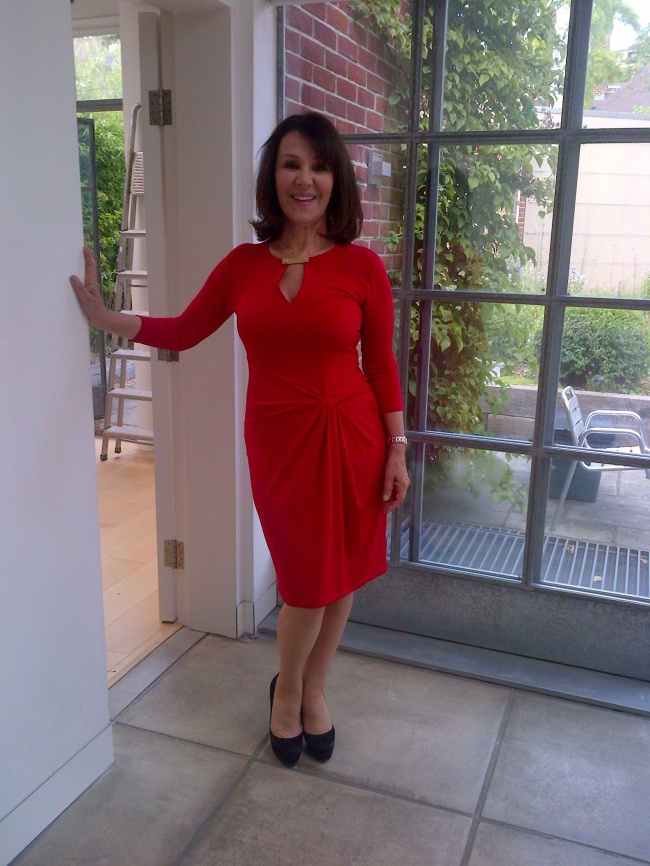 The weekend was a belated birthday treat from my Sister and her husband, who took myself and my partner to Brighton for the day on Saturday. The sun was shining, the birds were singing, and I was in my element wandering through the Lanes. The vintage shops there are some of my favourites, and I made sure I really scoured them thoroughly! We ate at Riddle and Finns, which I have to say was just heavenly. The day was superb from start to finish, only marred by the time I got home feeling a little worse for wear due to getting a bit of sunstroke. Hence Sunday was spent in bed drinking lots of water and catching up on my stack of magazines by the bed. 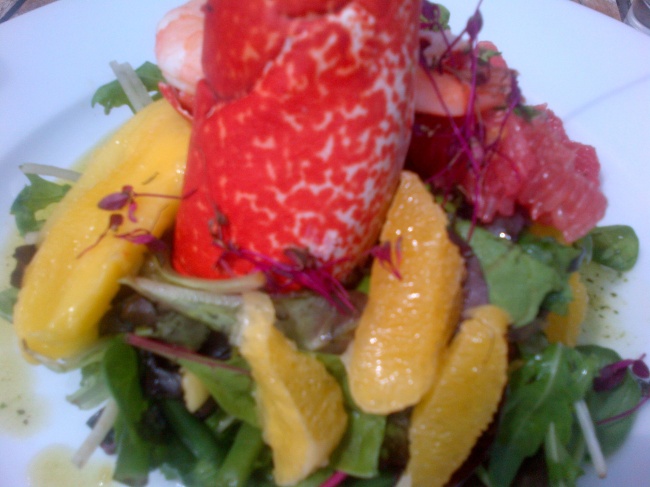 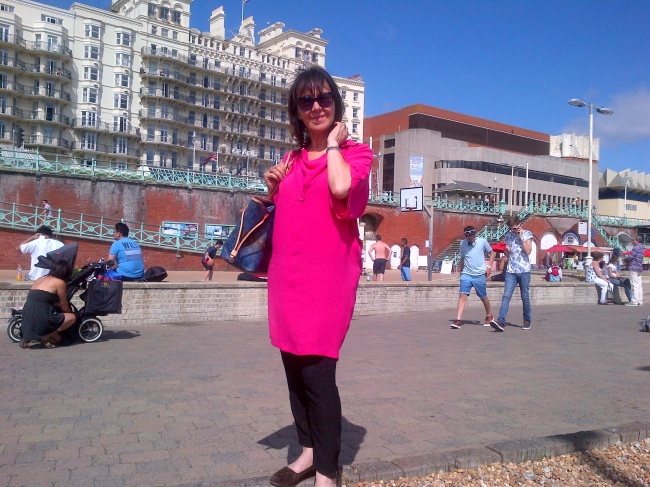 Feeling much spritelier and continuing in the birthday spirit, we took my partner to Odette’s in Primrose Hill on Monday to celebrate his birthday, and I have to say the food was out of this world. Light and fresh, and incredibly good value, I would highly recommend it to anyone local or otherwise, and I can’t wait to go back soon.
One thing I did want to share with you all is that this year, I’m really excited to have been asked by Save the Children to be part of their fantastic dance event the Ultimate Danceathon, taking place this October. Last year’s event was a huge success and it was great to see over 9,000 people all over the UK dancing to raise money for such a great cause. There were so many different styles of dance involved – from professional clubs to groups of friends who juts get together and dance in their living rooms! It just goes to show how great dance is at bringing people together! What’s even more exciting is that this year anyone who raises over £300 with their event will be entered into a prize draw to have tea with me – I’m really looking forward to a lovely afternoon chatting all things dance! If you love dancing and think that you’ve got what it takes to host a five-hour dance event then why not sign up this year? It’s really easy to get involved, you just register online at www.savethechildren.org.uk/dance and then get everyone together to dance for five hours and raise sponsorship money to help vulnerable children. Save the Children will even send you an organisers pack with everything you need to organise an event.
So it’s another busy week ahead, and I’ll be sure to check in next week without fail to tell you all about my adventures with dogs, The Apprentice runner up Lusia Zissman, and WAG the Musical…
Until next time…
Love Arlene x

My goodness where has the time gone? This past coupe of weeks have flown by, and I realised it’s been what seem like an age since I last cheked in! Seeing as there’s been so much going on, I’ll give you the edited version rather than make you sit through what could easily be a five page (yet still very exciting!) essay.

Starting way back on Monday over two weeks ago, I was treated to a gorgeous long lunch at Le Caprice with my agents, and it was as delicious as you could imagine. The rest of the afternoon was filled with a couple more meetings, a voiceover, and a quick change back at home to get ready for dinner at my new favourite place Balthazar to discuss an exciting top secret new film project! Full as can be from what was essentially a day of dining, I made my way home to bed as the rest of the week was looking busier by the minute…

Tuesday I was up early to get my hair done, and of course I couldn’t just sit and relax like most people do in the salon, I was busy giving interviews! You can read my one with the South Wales Echo http://www.walesonline.co.uk/whats-on/former-strictly-stars-flavia-vincent-4694501) and listen to my one with Gordon Burns here http://www.bbc.co.uk/iplayer/episode/p01b1yzl/Gordon_Burns_Arlene_Phillips

After the mornings chat and colour… I arrived at a studio in Islington for my Save the Children Christmas Jumper Campaign shoot. As soon as I have all the details about how you can get involved with their new initiative I’ll let you know, but what I can tell you is what a great afternoon I had! It was lovely to catch up with some of the other celebs involved, including Myleene Klass and Ashleigh and Pudsey, and before I knew it I was jumping in my car to the next port of call! I was opening a new centre on Harley Street for Alliance Medical alongside Joanna Lumley, and I have to tell you the things they can do with these new machines that can somehow make a 4D scan of your body is just remarkable. 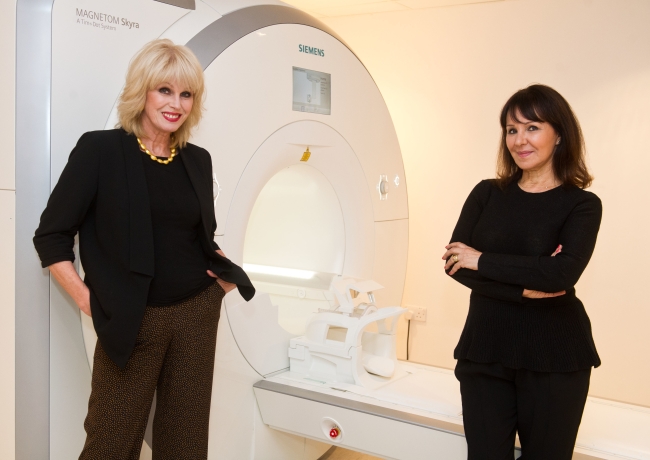 It was another early start on Wednesday, as I made my way to Denman College, Oxford University. I was there to meet the WI to give a talk on Dementia and give exercises and rhythms that may help in the fight in keeping the brain and body active! That evening I went to watch Billy at the Union Theatre, directed by Michael Strassen. It was a stunning production, and lovely to bump into my dear friend and producer extraordinaire David Ian.

Thurs was yet another early start for a long day of interviews for Care UK, and drinks in the evening with the wonderful Rob Jones.

Friday was a REALLY early start with an appearance on Daybreak talking about the Nations Favourite Dancer that was on the following Saturday night. Did you watch? Did you agree with the best dance moments – and if not then what are yours? Tweet me and let me know @arlenephillips!

The Weekend was a bit of a disaster, starting with driving three hours out of our way to get to a party in Surrey for the Orpheus Trust 15th Birthday.  Nerves fraying, we arrived only a couple of hours late… but I tell you what it was worth every second of temper tantrums in the car to see the incredible work the trust does in providing a music education and  life skills to disabled students.

Sunday morning I managed to put my back out on the exercise bike, so spent the rest of my day in bed!

Monday I was feeling a bit more mobile, and managed to make it to a meeting at Andrew Lloyd Webber’s offices about the upcoming Wizard of Oz tour in America.  Then seeing as I was literally next door, I popped into the Ivy Club to meet my darling Debbie Moore for a quick catch up before retiring back to my bed and trying to get the back, back to normal!

Tuesday I was feeling right as rain, and made my way into town for some top secret filming. I can’t tell you what it was for, but I can show you it involved this lot… 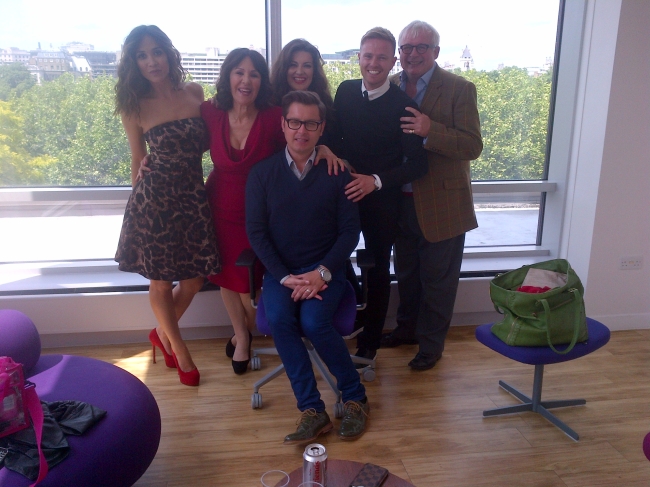 After my more hectic than usual week I was definitely in need of some R&R so I headed off to the country for the week. It was as always utter bliss, and although I popped back to London for some filming over the weekend (more about that in a minute) I’m still here and the relaxation programme is going strong, however I do hate being away from the gang at home, but someone’s got to keep Phillips Towers running!

As I mentioned, I came back to London for the weekend to film a celebrity edition of The Chase! I was fretting about it for weeks – have you seen some of the questions they ask?! I can’t tell you too much about it yet (as it seems with so much at the moment…) but there was both excitement and stupidity.

I turned up at auditions for the new cast of We Will Rock You and saw some fabulous dancers and after watching all that activity, I went on eating overload at the opening of Five Guys in Covent Garden. 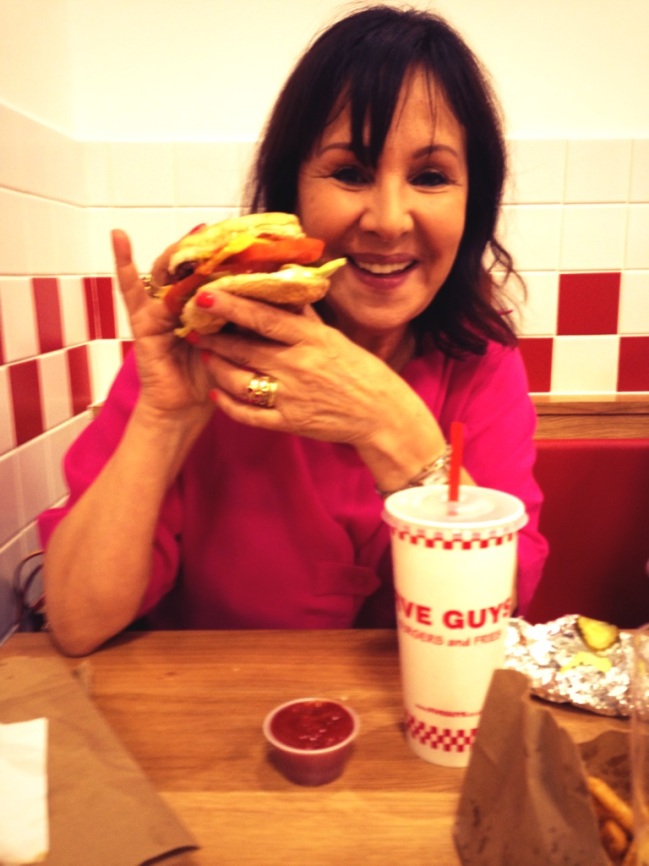 I hope you’ve enjoyed reading about my adventures in showbiz land this week, and I promise to keep up to date so expect more hot gossip coming soon!

PS If you’re keen to get your dancing seen check this Dance competition from Danceamatic out!