So it’s been a while I know, but traveling off down the Yellow Brick Road all the way to Toronto and back has left my head spinning!

I’ll start a couple of weeks ago, where I was lucky enough to be Andrew Lloyd Webber’s guest to attend a private showing at the Tate Britain to see the glorious Pre-Raphaelites collection.  It was such breathtaking artwork, and will never to be seen again publicly – certainly not in my lifetime -so I felt all the more privileged to have seen it and to by guided by Andrew.  It was an utterly glamorous affair, with champagne and delicious cocktails floating past me that I tried to ignore, as I knew I had an early morning and a long trip ahead of me.

Up early I was indeed, and on a flight heading for my first live show of Over the Rainbow in Canada.  Straight off plane and onwards to meet my fellow judges, then into fittings as 16 outfits for the next 6 weeks had to be found!  Of course I arrived bang in the middle of the prestigious Toronto Film Festival, and being alongside Lord Lloyd Webber meant only the best restaurants, surrounded by stars at every turn would do.  Two of the incredible places we ate at were Toca in the Ritz Carlton, where the fish and chips was actually lobster and chips… and Nota Bene, a dreamy Italian where I actually had no idea what some of the food even was!

The first show went off without a hitch or a switch, and soon it was time to wave goodbye to our first Dorothy, and me to Toronto for another week. 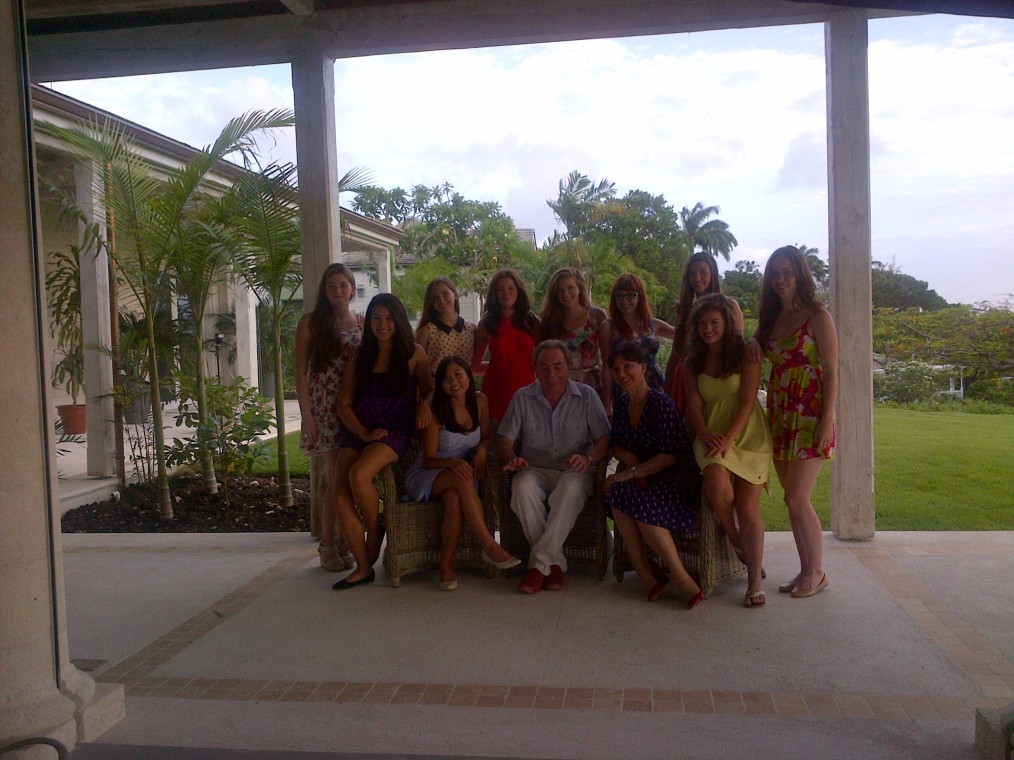 I arrived back in London on Tuesday morning, and headed straight off to work, with matchsticks holding my eyes open, to start creating the Wizard of Oz Canadian show, which has a completely new set to the original London production, and so all the staging has to be reset to accommodate it!

Of course it wasn’t all work work work, and I got to attend a couple of fabulous opening nights, the first being Forever Crazy.  A totally hot burlesque show all the way from Paris, starring the most beautiful girls you have ever seen, with legs to die for, that can DANCE.  The other was the much anticipated Jesus Christ Superstar arena tour, that was in a word, phenomenal.  Ben Forster and Tim Minchin were just out of this world, and the show was big and loud, just like to should be. If you haven’t yet, go go go!  It was lovely catching up with Amanda Holden, Melanie C, and of course Ben Forster and Tim Minchin.

I managed to squeeze in a fabulous lunch with the even more fabulous Debbie Moore, who cooked for me at her beautiful new apartment, and it was gossips and giggles for as long as we had. Thats and the rest of my time spent catching up with Coco, it was almost time for me to hop back on the plane to the land of Oz, but not without a couple of minor disasters first…

If you’re anything like me, traveling is never the calmest experience, so I like to have everything in order and ready to go at least by the night before. Which is why when my blackberry decided to pack up, and the house alarm system set itself off, it was just carnage.  How could I leave without my lifeline  – and would I be able to get some sleep??  When Vodaphone sent through a broken replacement, and my partner was standing with a towel over the alarm for the best part of an hour, I began to despair.  Fortunately they came through with a working handset, and the alarm guys managed to switch the thing off… So normal service was resumed, sleep was had, and the next morning I was off again to Toronto.

You’ll have to wait a couple of weeks to hear more about my crazy commuting life from London to Toronto, but trust me, it’s worth it

Last week has been a mix of crazy times, lazy times and work times!  I’ve been to glorious Barbados to stay at the home of The Andrew Lloyd Webber, where our search fro Dorothy for the Wizard of Oz Canada has begun.  Twenty girls flew from Toronto to Barbados and sung their hearts out to me and  Andrew, ten girls were sent home with broken hearts, leaving our final ten Dorothys to battle it out over the next eight weeks. They’ll be appearing live every week on the Canadian version of Over the Rainbow, and your’s truly here will be head judge, in charge of finding the perfect one.  We found some incredible talent, and I can tell you now it’s going to be hard to choose!  I’m not allowed to show you yet, but as I soon as I can I’ve got some amazing pictures of our ten girls to post, so keep an eye out for them…

Barbados was paradise indeed and there are no better hosts than Lord and Lady Lloyd Webber.  On the Island, I was lucky enough to have dinner at the world famous Sandy Lane Hotel, enjoy it’s glorious food and drink champagne and rum punch, and take a tour of the incredible beauty around me.  Partying went on late into the night, and at one such evening which included the dreaded Jeremy Kyle, I got everyone up singing and dancing to So Long, Farewell from The Sound of Music, as nobody wanted to leave so we tried to make it last as long as possible!  Oh and for the record, Jeremy Kyle is in fact, a pussycat!  (but don’t say I told you so…)

All too soon it was back to London, life, and work!

This past week I’ve been campaigning for Save the Children, and highlighting the fact the HOW MANY MILLION children are living in unbelievable poverty right here in the UK, and just how shocking it really is.  I went from BBC Breakfast in Manchester, to BBC news in London, to Alan Titchmarsh, to Channel Five, meetings galore – even to the Serpentine Gallery to record a podcast with the gorgeous Lauren Laverne (you can listen here) It’s been a whirlwind few days, and my head is spinning with facts and figures, and yet all I can think about is how else to get the message across.  Please check out the campaign here, and do what you can, it shouldn’t happen here.

Who saw the Celebrity Antiques Roadtrip I filmed a couple of months ago, that was shown on BBC2 last Wednesday night?  Me and Anton Du Beke, some antiques, some vintage cars, and some hilarious banter. You can watch it on catch up here.

I finished my week with a day in Bochum at the incredible production of Starlight Express, WOW is all I can say!

So I hope you have all enjoyed the attempt at Summer, and best of luck to all starting back at school!

Error: Twitter did not respond. Please wait a few minutes and refresh this page.